In addition to the impact that this case has had on our beneficiaries, the interim measure may be of wider significance for at least three reasons: 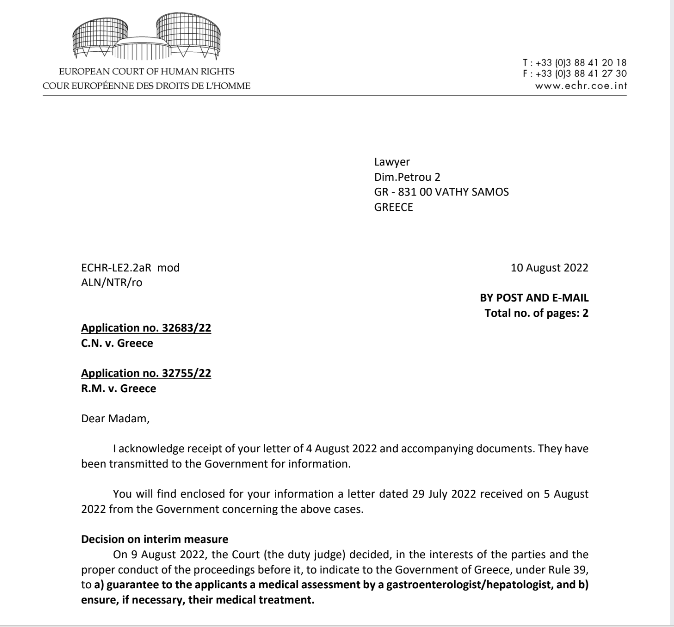 both the applicants had the legal right to leave the island as their “geographical restriction” had been lifted months before. In contrast to 2018-2021, the authorities have been more lenient with lifting the geographical restrictions of people who need medical treatment on the mainland. Yet, as argued by IHR in the case, the lack of organised transfer from Samos leaves people with geographical restrictions in all but name as they are unable to relocate to the mainland due to their lack of resources. The ECtHR, in granting the interim measure, appears to have accepted the argument that legal status alone cannot be relied upon by the authorities to fulfil their obligations. Instead, practical and material provisions must also be considered when evaluating people’s real access to medical treatment.

neither of the applicants to the case are legally considered to be asylum seekers by the Greek authorities. One is a recognised refugee and the other has a limited no-deportation status pending the appeal of their subsequent application. Despite their different legal statuses, the Court has still found that Greece has an obligation to provide them with access to specialist medical professionals and required treatment. For the applicant with a no-deportation status, this is of particular interest as typically such people are denied access to medical treatment as they no longer have a healthcare number (PAAYPA).

While we are delighted that the European Court of Human Rights has granted an urgent interim measure in favour of the Applicants, there are many others who are stuck in a similar position – they have the legal right to leave Samos to receive urgent medical care, yet due to the lack of support from the authorities they are practically unable to do so. To fulfil its human rights obligations, we call on the Greek authorities to immediately resume organised transfers from the islands.

Click here to read the full document of the decision.