The criminalisation of asylum seekers is a systematic practice in Greece and is part of a wider effort to prevent people seeking safety in Europe. For the majority of people seeking asylum, there are no direct or regular routes to reach Europe. Instead, people are forced to take irregular journeys to reach safety. For many, these irregular journeys include paying smugglers, who facilitate their entry to Europe.

Yet often, smugglers abandon people at sea, leaving asylum seekers to fend for themselves by driving the boat to safety. It is in this way that the Greek authorities use anti-smuggling legislation to criminalise “boat driver” asylum seekers, who are no longer seen as people seeking safety but rather as criminals, charged with “smuggling” or “facilitating illegal entry”. 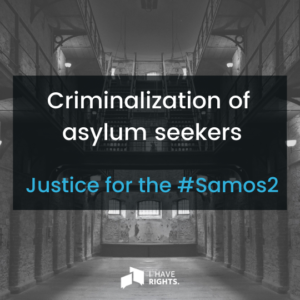 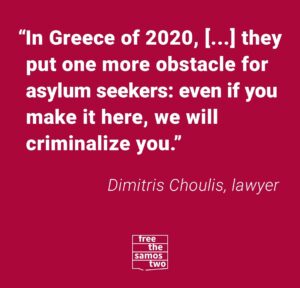 On the 18th of May 2022, one year and half after their arrival on Samos, the Samos#2 trial was heard. The trial concerned the events of the night of 7th of November 2020, when a boat carrying 24 people tried to reach Greece from Turkey. Among the passengers were Hasan and his family and N. and his six-year-old son. Both families were seeking safety in Europe after fleeing Afghanistan.

The boat began to sink near Samos and while the Hellenic Coastguards were notified they did not arrive until the morning of the following day, resulting in the death of N.’s son. Yet, it was N. who was arrested and charged with “endangering the life of his child”, facing up to 10 years imprisonment. Hasan was also arrested for allegedly steering the boat and was charged with smuggling, endangering life and causing the death of N.’s son, facing 24 life sentences.

The course of the trial

The trial took place on the 18th of May 2022 at Samos Court. At 10am, the lawyers, journalists and supporters of the defendants arrived at the Court. From there, long hours of waiting followed. People were concerned that the trial would be postponed, thus extended the Samos#2’s time in a state of legal uncertainty [1]. While the defendants were not present during the trial (N. got his refugee status and is no longer living in Greece and Hasan had left Samos several months ago), Hasan’s family was present to testify about what happened on the 7th of November 2020.

After more than three hours of waiting, the trial finally began. Everyone entered the room to attend. A few minutes later, the judges asked everyone to leave the room and wait in the hallway. The trial started again after a while, the doors were open and the people waiting in the hallway were able to listen to what was being said. Hasan’s sister gave her testimony, thanks to a translator in Farsi, as well as one member of the Hellenic Coastguard.

After a little bit more than one hour, everyone was asked to wait outside the room to let the Court deliberate. N. was acquitted of all charges and Hasan was sentenced to 1 year and 5 months on probation.

[1]  This kind of delay is very common in similar cases. Amir and Razuli’s trial on Lesvos, for example, was postponed two times. The defendants now have to wait for eight months in detention before they can be heard in December. 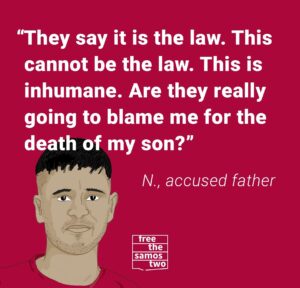 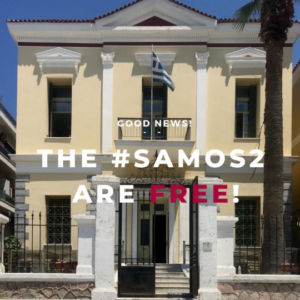 Seeking asylum is not a crime and N. and Hasan should never have faced these charges. The unexpected outcome of the #Samos2 trial should serve as an example for similar cases. We demand the acquittal of all charges against asylum seekers considered as criminals for having been forced to drive a boat to find refuge. Criminalisation of migration and people on the move must end. Militarising and externalising border protections increase smugglers’ profit and increases the precarity of people who are seeking safety. Regular and legal routes must be established so people can safely reach Europe to seek asylum.