6. Anniversary of the EU-Turkey Deal

General overview of the EU-Turkey Deal

Six years ago, on the 18th of March 2016, the EU-Turkey Deal (“the deal”) was adopted by the European Council and Turkey. The deal’s goal was clear: to prevent people from coming to Europe to ask for asylum by keeping them in Turkey while compensating Turkey with “development” aid. The deal was presented as a temporary  answer to the so-called “migrant crisis” of 2015, yet six years on, not only is it still in place, its scope has even been expanded. 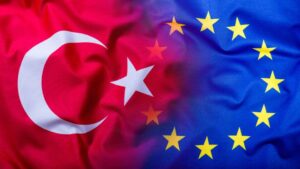 How does it work?

According to the deal, Syrians arriving to  Greece, who cannot prove Turkey is unsafe for them, would be returned to Turkey, with the cost being covered by the EU. This is despite the international right to ask for asylum granted by the Convention Relating to the Status of Refugees, commonly called the Geneva Convention of 1951. In addition to the 6 billion euros paid by the EU to Turkey, for each individual sent back to Turkey, one Syrian asylum seeker would be relocated from Turkey to the EU.  Since June 2021, the deal was also expanded to apply to  asylum seekers from Afghanistan, Bangladesh, Pakistan and Somalia.

The deal is based on the flawed principle that Turkey is a safe third-country for Syrians, Afghans, Somalis, Bangladeshis and Pakistanis. This is despite substantial evidence that Turkey is not a safe country for many asylum seekers, including the five nationalities covered by the deal. 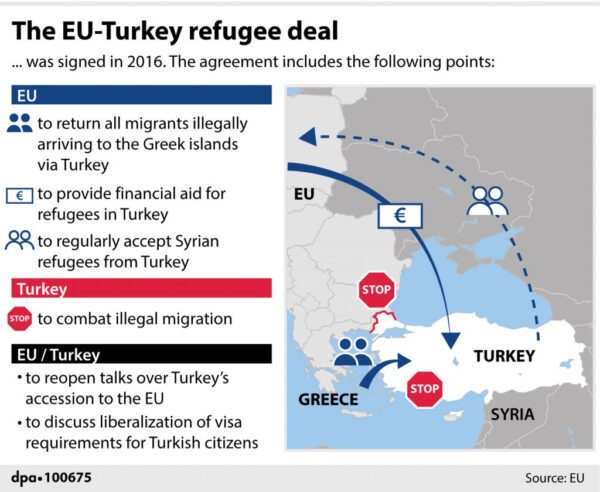 Moreover, in the deal, Turkey is given permission to use “any necessary measures to prevent new sea or land routes for illegal migration opening from Turkey to the EU”. Not only does this wording represent a flagrant disregard for the right to leave a country enshrined in international and European law, it also appears to condone human rights violations and the use of force against people seeking safety in the EU.

What has changed since the implementation of the deal?

The number of asylum seekers coming to Greece has reduced after the adoption of the deal in March 2016 and has had severe consequences on the human rights of people on the move.

Closely intertwined with the deal is Greece’s “hotspot” approach to migration. Since 2016, five Greek islands, Samos, Lesvos, Kos, Chios and Leros have been used as mass containment sites where thousands of people have been confined in inhuman and degrading conditions as they await their answer for their claims for protection.

The hotspot approach, combined with the EU-Turkey Deal has had disastrous consequences for people stuck on the hotspot islands. Not only are people from Syria, Afghanistan, Somalia, Bangladesh and Pakistan confined to the islands for the duration of their asylum applications as per the hotspot approach, they must also go through an additional interview, called the ‘admissibility interview’, where in line with the EU-Turkey deal they must prove that Turkey is not a safe country for them.

For those who cannot prove that Turkey is unsafe for them, they are deemed ‘inadmissible’ and, as such, are not permitted to continue with their asylum application. In accordance with the EU-Turkey Deal, these people should then be returned to Turkey. Yet, from 2016 to 2020, only 2.140 people were returned to Turkey from Greece, with many more who were deemed to be ‘inadmissible’ remaining stuck on the islands. Furthermore, since  March 2020, there have been no returns to Turkey. The official explanation for this is because of the Covid pandemic, but it is suspected that this is also due to the increase in geopolitical tensions between Greece and Turkey in the same period.

Whatever the reason behind this halt in deportation, the crucial point is that for asylum seekers from the 5 EU-Turkey Deal nationalities, if they cannot prove that Turkey is unsafe for them, they are stuck in a limbo: they are blocked from continuing with their asylum application, meaning that they must stay on the hotspot islands and endure inhumane living conditions, while at the same time they cannot be deported to Turkey.

It is also important to note that since 2016, there has been a strong increase in pushbacks from Greece to Turkey, establishing pushbacks as “a de facto border policy”. Beside the deal, this is also a reason for a low number of new arrivals on the islands.

How does it affect our beneficiaries and our work?

The EU-Turkey Deal applies to 60% of I HAVE RIGHTS’ beneficiaries. Unable to progress with their asylum claims, many of our beneficiaries have been stuck on Samos for years. As explained above, beneficiaries of the five  EU-Turkey Deal nationalities are required to prove that Turkey is not safe for them. If they cannot do this, Greece will refuse to examine their claims for protection and take away their asylum seekers card, leaving them undocumented. Yet with there currently being no returns to Turkey they are stuck on the island and are de facto detained in the new EU funded Closed Camp, as without documentation, people are prevented from leaving the camp. This state of de facto detention applied to 100 out of the 450 residents of the camp in December 2021. At I HAVE RIGHTS we work with our beneficiaries to provide them with legal counselling and representation in order to empower and support people to leave this legal limbo. We mostly do this through either appealing their admissibility decision or through supporting them with a subsequent application. 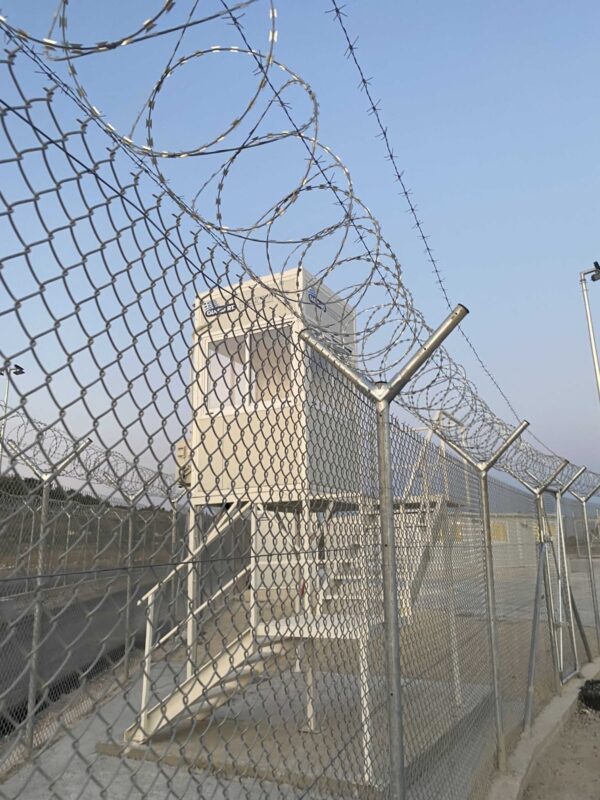 Through the hotspot approach, the fast-track border procedure was created which applies to 100% of I HAVE RIGHTS’ beneficiaries. The fast-track procedure speeds up the asylum process by requiring that asylum seekers stick to strict deadlines. For example, people often have their first interview before they have had a chance to speak with a lawyer or get information about the asylum procedure, often leading to people whose asylum claims would normally be accepted, be rejected. They then are only given 10 days to submit an appeal. Such short time frames make it challenging for people to reach legal actors, and gain essential legal counselling and representation. At I HAVE RIGHTS we work with our beneficiaries in order to ensure that their appeals are submitted within this strict deadline, allowing them to stay in the asylum system and have their claims for protection properly scrutinised by the authorities.

We call for an end of the EU-Turkey Deal and the flawed assumption that Turkey is a safe country for particular nationalities. Every person seeking asylum is an individual and must be examined as such. This is why we advocate for a fair asylum procedure that applies to everyone, irregardless of nationality.

If you want to support our work, you can donate to I HAVE RIGHTS or join our team!