The real crime is the border regime – Justice for N. & Hasan

After shipwreck, survivor faces more than 230 years for “boat driving” and father charged with the death of his 6-year-old child

On the Greek islands, the politics of criminalization and deterrence of refugees is escalating: in an unprecedented move, N., a young father, is charged with the drowning of his 6-year-old son during a shipwreck. He will be on trial together with his co-passenger Hasan who is facing life imprisonment for steering the boat – a common practice at Europe’s external borders. 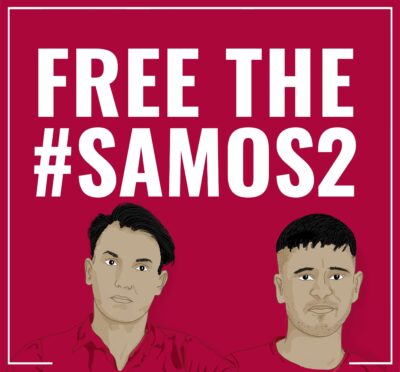 On the night of 7 November 2020, N. and Hasan tried to reach Greece from Turkey on a rubber boat together with 22 other people. Among the passengers were N.’s 6-year-old son and the sister, brother and disabled mother of Hasan. The families had fled Afghanistan and were seeking safety and a better life in Europe.

Off the Greek island of Samos, the boat became distressed, hit against the cliffs and capsized. All passengers went overboard. Although the Greek Coast Guard was notified about the emergency, it took them several hours to arrive at the scene. However, they did not carry out a rescue. Survivors testified that they twice saw a coast guard boat approach but it did not rescue them(1). In the morning hours of the next day, N.’s little boy and a 9-month-pregnant woman were found on the rocks. Luckily, the woman survived and gave birth to her child three days later. For N.’s son, all help had come too late.

Despite being devastated by the death of his child – and his own near drowning moments before ​​– 25-year-old N. was arrested. Only after pressure by his lawyer and the UNHCR did the police let N. see his son and identify the lifeless body. He was put in pre-trial detention and was the first asylum seeker ever to be charged with “endangering the life of his child”, facing up to ten years imprisonment. 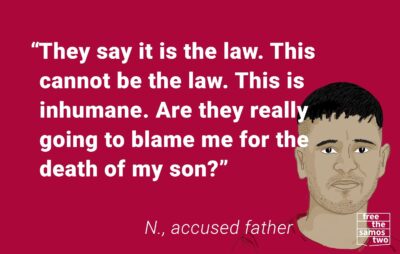 N.: “They were really cruel to me. I lost my son. He drowned in the water. On top of that, they arrested me in that horrible situation and put me in prison. They say it is the law. This cannot be the law. This is inhumane. This must be illegal. Are they really going to blame me for the death of my son? He was everything I had. I essentially came here for my son.”

Dimitris Choulis, lawyer: “In Greece of 2020, when we have the policy of systematic push-backs, you put one more obstacle for asylum seekers: even if you make it here, we will criminalize you. As an asylum seeker, what can he do? Travel here and leave his child alone in Turkey until the end of the procedure?”

23-year-old Hasan was also arrested. At some point during the journey he steered the boat. Because of this he is charged with the “transportation of 24 third-country nationals into Greek territory without permission” (smuggling), with the aggravating circumstances of “endangering the lives of 23“ and “causing the death of one” – N.’s son. He is facing a life sentence for the death of one person plus a further 10 years imprisonment per transported person, amounting to 230 years plus life imprisonment.

While N.’s case constitutes the first of its kind, the “smuggling” charges brought against Hasan are not an isolated incident but typical of another aspect of Europe’s policy of deterrence. As documented by CPT – Aegean Migrant Solidarity, borderline-europe and Deportation Monitoring Aegean, the filing of such charges has been systematically carried out by the Greek state to criminalize migration for several years. The basis for this is the absurd notion that any person found to have driven a vehicle across Greek borders carrying people seeking protection commits a crime – even if the person themselves is seeking protection too. Per boat, police routinely arrest one or two persons, sending hundreds of migrants straight from the boat to prison(2).

While European sea rescuers and activists receive a lot of attention when they become the target of criminalization, the everyday practice of incarcerating non-Europeans facing the very same accusations goes almost unnoticed. However, they constitute the majority of those arrested and imprisoned on grounds of “aiding unauthorized entry”, aka “smuggling”. Arrested immediately upon arrival, most of them do not have access to proper legal defence, let alone external support. With Greece punishing “smuggling” more severely than murder, this results in people who came seeking safety in Europe being put behind bars for decades(3).

The charges are filed despite the fact that the European Union’s policy of closed borders forces people to rely on unsafe means for transportation and other people to help them cross. With no safe and legal routes available, so-called “smugglers” are in fact often the only way for people to reach safety. To criminalize refugees for “smuggling” however is a direct attack on the right to asylum.

Dimitris Choulis, lawyer: “By doing this, we criminalize asylum seekers that have no alternative. There is a part during the journey where the only thing they can do is to drive the boat in order to save their lives.”

Hasan: “We are just migrants and when the migrants want to come, the smugglers won’t come. They will force the migrants to bring the boat to its destination themselves, whether they know how to drive a boat or not.” 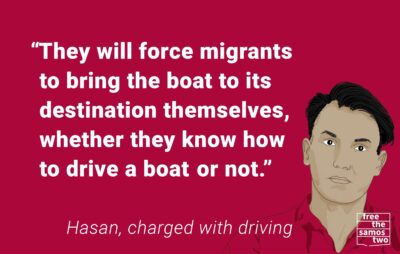 Hasan was charged despite other passengers, including N., stating that Hasan simply took the wheel because someone had to. “Hasan carried his paralyzed mother on his back when we got into the boat”, Ibrahim, one of the survivors, recalls. N. stresses that he does not blame Hasan for the death of his child, but the fact that they had no alternative but to take the dangerous journey.

N.: “No matter how many times you repeat it, it was not the driver’s fault. He is just a migrant and his family was also there, he didn’t do anything wrong, he is not to be blamed. I just ask for this, I want this person to be released.”

Instead, N. filed a lawsuit against the Greek Coast Guard on 23 March 2021 for delaying the rescue and failing to render assistance, therefore leading to the death of his son. On the gravestone of his son it reads: “It wasn’t the sea, it wasn’t the wind, it was the policies and fear.”

The shipwreck of 7 November 2020 and the death of N.’s son were neither the fault of N. and Hasan, nor were they an unfortunate tragedy. They are the direct result of the EU’s escalating closure of borders, leaving people with no alternative than to risk their lives and those of their families on increasingly life-threatening journeys. N. and Hasan are being scapegoated to divert attention from the EU’s responsibility for these deaths, shifting the blame to those already suffering the most.

In its attempt to stop people from coming to Europe by any means necessary, the EU is resorting to ever more cruel and absurd measures.

Hasan: “This must end. I am the caretaker of my family and I have to support them, because my mother is paralyzed, I have a sister that is very young and my brother has psychological problems. I really need to be with them. Their only caretaker is me. And now, because of this boat driver story I just don’t know what I should do.”

(1) The Coast Guard’s version of the night raises even more questions. According to the head of the Coast Guard, the pregnant woman was rescued at 3 a.m. and N.’s son at 6 a.m. The official Coast Guard report however states that they were taken to the port of Vathy at 9.30 a.m. Furthermore, the official autopsy, conducted days later, dates the child’s official time of death exactly 21 minutes before the emergency call was received, absolving the coast guard from responsibility. However, according to an expert opinion ordered by the lawyer, such a precise time of death cannot be determined, especially days later.
(2)  As of 2019, people convicted for facilitating irregular entry constitute the second largest group in Greek prisons (Official numbers by the Greek ministry of justice).
(3)  In May 2021, Mohamad H. was sentenced to 146 years. In April, Khaled S. was sentenced to 52 years.